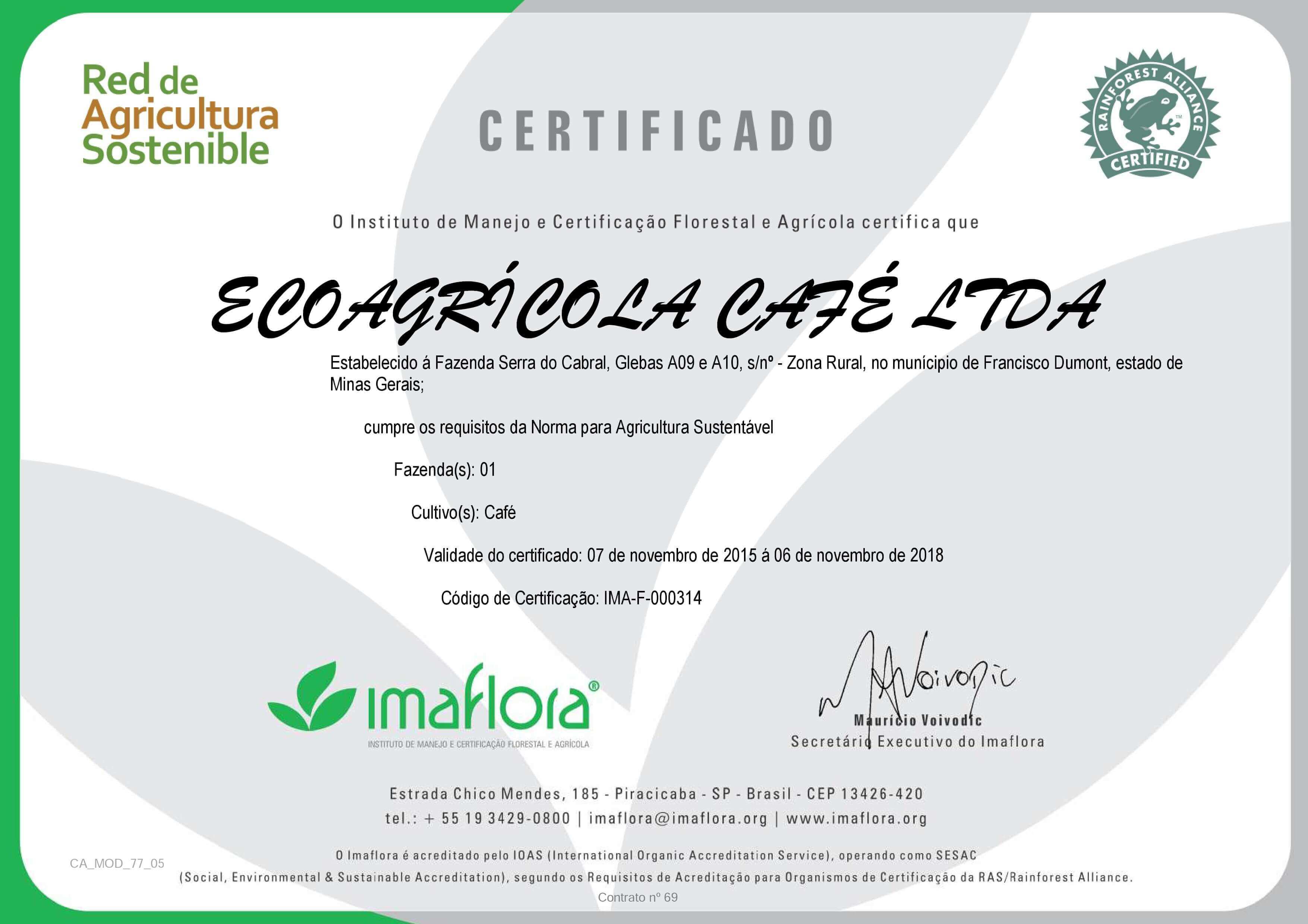 Characteristics of the coffee lot

Characteristics of the property

History of the farm

The family bought land in the Serra do Cabral region in 1975 to do forestry projects. In 2000, it started planning for the next 30 years and decided to diversify. Among many possibilities, coffee was chosen for the great t with the region: favorable altitude, climate, water, terroir. Also, the goal to keep producing with sustainability, using technology and to be able to produce quality driven products (specialty co ee) was key.

The managing partners of Ecoagri_cola are brothers Marcelo and Roberto Flanzer, who have been working together since they were young and managed the company with their father Henrique, who is now retired. Marcelo, 46, is a Production Engineer and Roberto, 49, a Business Administrator.

The family started to plant its first coffee nursery in 2006 and the first harvest was in 2009. Since 2012 it has been Rainforest Alliance and UTZ certified. In 2014/2015 it was chosen by illyca e as its “Sustainable Supplier of the Year” and it has have been finalists of their “Ernesto Illy Prize” for the last few years. Since 2015 it has collaborated with the Federal University of Lavras (UFLA), led by Professor Flavio Borem, to continually increase quality. In 2016 it began, as exporters, its direct-trade program reaching important clients in North America, Europe, and Oceania.

Since the beginning, the producers carefully thought about all aspects of production, starting with education and training of the team, cultivation with the best techniques, and including post-harvest care, always seeking to produce specialty coffees.

The Serra do Cabral is such a beautiful place. It is part of the Cerrado biome, with its own particular characteristics, micro-climate and a unique terroir. Ecoagricola is a pioneering co ee farmer in this region and the exclusive producer. Sustainability and ethics are at the core of its values. Many decades before sustainable production became fashionable, Ecoagricola was already preserving vast areas within its land. Hundreds of hectares almost untouched by man, and more than 50% of the total area.

Ecoagricola has had a partnership with the Federal University of Lavras (UFLA), though Professor Flavio Borem, for continual quality improvement since 2015. It uses selective hand picking, African beds, as well as mechanized picking and concrete drying patios. It has a fine quality control team, led by Q-Grader, Danilo Buzatt.