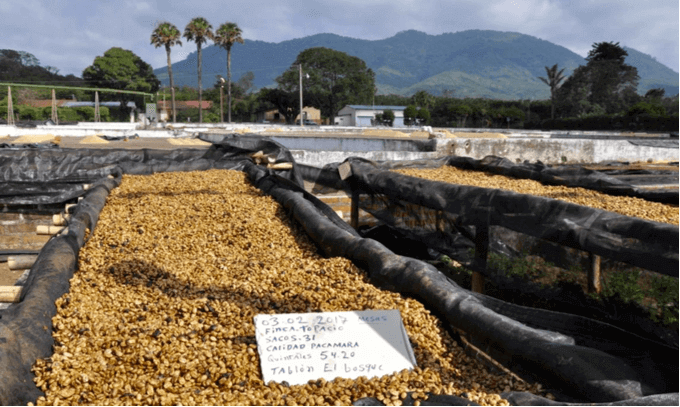 More than a century ago, two ancient coffee-producer families were being united by their offspring _s marriage: Francisco Magaña and Evangelina Cáceres.

Both families were very active in the coffee business and had their lands in the same Apaneca-Ilamatepec Mountain Range, Juayua City, Sonsonate State.

Maria Elena´s grandfather, Francisco Magaña, being an attorney in law, dedicated his entire life to his passion, the coffee production, which he did in the best possible way, teaching his people to treat and pamper the coffee plants with so much care and dedication. Francisco and his wife “Mamaevita” were always at the farm taking their grandchildren for the harvest season so they can pick and admire the gorgeous red cherries.

The family owns 3 sister farms: Ausol, Topacio and Diamante. Ausol and Topacio are located at the top of the mountain and are neighbors joined by a 12 ha forest. Diamante is closer to Juayua City and is where the administration, processes and storage of the 3 farms is located.

Maria Elena husband Leopoldo, being like as Maria _s grandfather to produce coffee by himself since his High School times, and has been managing their farms since the inherited them, his expertise  and dedication has kept all labors in progress, even in the worst times that our country had to go through, and their good and efficient laborers have done the rest, thanks to them, we had the blessing to receive this COE reward.